I made a ton of fleece blankets with crocheted edges as my "portable projects" at the hockey rink, but then I ran across a pattern for a kitty den. I liked the idea, but I wasn't sure if my cats were actually going to take to it, so I didn't want to buy the expensive super jumbo bulky yarn used. (Also, I didn't really like the available colors.) Instead, I used four strands of worsted weight yarn held together. Figured that if they didn't like the final product, it was completely washable and so could be donated to the shelter.
Well.....I wasn't able to weave in the yarn ends for quite some time, because they fell in love..... 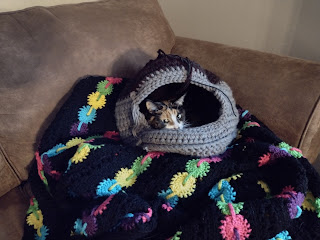 And then there was jealousy.... 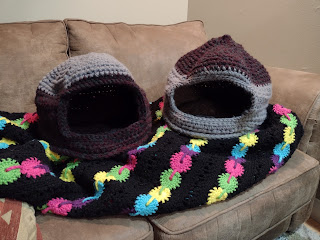 So now there are two kitty yurts in my house....plus I'm apparently in business to make them on commission! FYI - in case you also need kitty yurts - I bought four 6 oz skeins of the grey and two each of claret and charcoal (held those together for a more "tweed" look), and that got me almost 3 total yurts. (I had to buy more grey to finish the second "grey body" yurt.
Posted by Kris C. at 10:41 AM No comments:

Email ThisBlogThis!Share to TwitterShare to FacebookShare to Pinterest
Labels: crochet

A friend mentioned that she wanted a crocheted F-bomb, so naturally I looked up a pattern - and found a free one! And then I had to try it. This is too much fun, and it was easy to make. I already had all the colors on hand, so no big deal. She'll still probably get this one, but I'm going to need one to keep, plus I think a few friends will get them for Christmas. 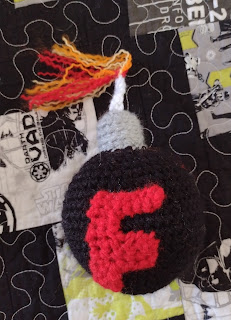 When you spend hours upon hours at the hockey rink on a weekly basis, you need a portable project to work on. First it was the cross stitched ornaments. Then I got cold, so I started doing fleece blankets. These are pretty simple - 2 yards of 56-60" wide fleece for adults, 1.5 yards for kids. I wash the fleece, straighten the edges, and curve the corners using a dinner plate as a template. Then I serge the edges to make it look more finished. And then I use my rotary blade that makes perforations in the fabric - about 3/4" from the edge. I mark the corners (basically where I feel the curve starts and ends ) with stitch markers (you can just eyeball it, but I'm obsessive). And then I do a row of sc around the entire blanket, folding the hem over as I go and doing (2 sc in first hole, sc in next) between the stitch markers. My second row is straight sc. After that, it's whatever stitch pattern I want.


I'm up to 20+ blankets so far this hockey season! They're easy and so much fun to make. And I don't have to count or pay much attention, so perfect while watching a hockey game! A lot of them became Christmas gifts this year. Obviously I didn't take pictures of many - just kept churning them out.
Posted by Kris C. at 11:08 AM No comments:

A few months back, I found a delightful cross-stitch shop on Etsy - Canadian Stitchery! They have wooden blanks that you cross stitch designs onto. Most of the ones I bought were ugly Christmas sweaters, but I also found a few other cute ones. 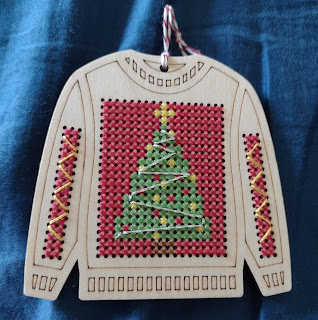 This one made its way into The Husband's stocking this year - seemed the most fitting for him. 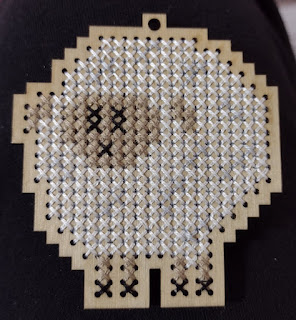 The sheep was a birthday gift for a friend, so that it would be there in time to put on her tree. She loves sheep, so it was perfect. (This was actually in the Easter ornament section, but who cares?) 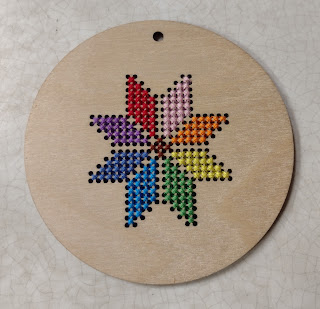 My grandma is a quilter, so I figured she'd appreciate the quilted star. 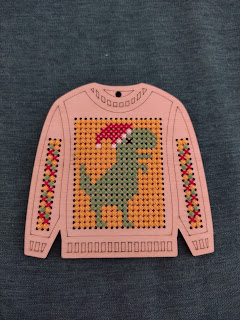 This dinosaur was for ME! I just thought it was hilarious. 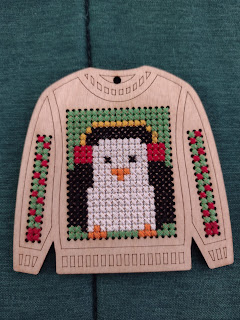 For Thing 1, who loves penguins. 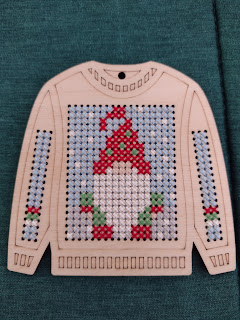 And for Thing 2, because it was just funny. Everyone seemed to enjoy the ornaments in their stockings.
Posted by Kris C. at 12:57 PM No comments:

So I haven't been sewing for awhile, and it's been even longer since I blogged. Here is the first set of out-of-town Christmas gifts that I am sending out. 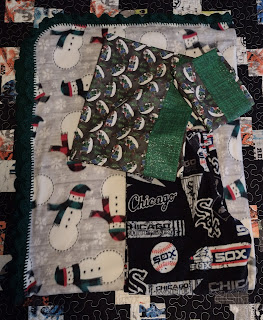 The snowman afghan is what I've been doing a lot of lately - prep a piece of fleece, then crochet an edging on it. This works out well for portable projects at the hockey rink. The White Sox fleece pants were done much earlier in the year (and saved for Christmas!), and the pillowcases were just finished up today. At least I realized that I had only sat on that fabric for almost a year and not 2 years like I was thinking? 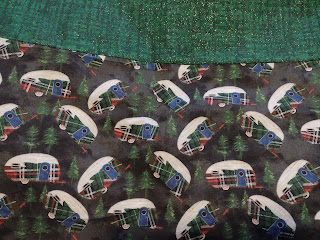 Isn't the fabric cute? My friend is going to love these. I used the burrito method and french seams, so they're totally clean inside. I really should make pillowcases as gifts more often.

So Thing 2 and I were attending a wedding, as we were going to have to go directly from wedding to hockey rink. I wanted to wear something that was comfortable and would translate well between the two. I have a knit maxi skirt that looks nice and is very comfortable, and I decided to go with a V-neck T-shirt (because Missouri in July!). But a) that's not terribly dressy, and b) no pockets. So....enter the short-sleeved cardigan plan. Which is normally something that makes me ask "Why?" - because it seems weird. Why wear a cardigan if it's short-sleeved? Well, in this case, it's to dress up an outfit and give yourself pockets.
I thought I had black stretch lace, but unfortunately I had merged "hunter green stretch lace" and "black stretch velveteen" in my head and gotten the wrong idea. Hunter green wouldn't go, and velveteen wasn't the look I wanted. Off to JAF I went, where I briefly flirted with a celestial stretch velvet and a a sparkly stretch velvet. (The bride is super sparkly and would have approved of either.) But then I remembered that this was so not me. Instead, I found a black stretch crepe.
Aside from not using three-quarter sleeves, I made this exactly as I have previous versions. Oh, and I did go down one size. I figured this isn't as drapey as the cotton-Lycra prints I've used, and I wanted it to be a little more figure-hugging. The arms are definitely tight, and I measured the length of the sleeve opening after sewing the shoulder seams, then matched that with the bands. I think it worked out a lot better than using their listed lengths. 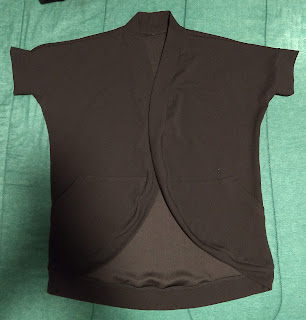 As previously noted, the pattern does not call for stabilizing the shoulder seams, but I think it's a good idea. This fabric is more stable than my prior versions, so I didn't need to stabilize behind the pocket attachments, but I did stabilize the shoulders. Since there was no chance of the fabric being seen (either colors or just the added thickness) from the outside, I decided to have some fun with colorful scraps.

All in all, I was happy with this make. I will try tracing off a larger size just at the lower armscye next time, though, because the "sleeve" was still pretty tight. A common complaint with this pattern.

It's done!!!! I'm not sure when exactly I started it - probably in late February or very early March, based on the first pic I posted to friends. As of mid-March, I had all the black stitches half done (literally!) and the yellow fully done for Calvin's hair. And on July 4th, I finally finished it!!! I am now awaiting a good custom framing coupon at JAF to get it professionally framed.

Pattern from DigiPoint on Etsy, though no longer available.